Alumni give back to youth from Outreach Programs

On Saturday November 14, two outreach clubs had the opportunity to take part in a workshop making use of Spivo Sticks, a selfie stick with a rotating button, allowing a 180-degree rotation of the filming device.

Founded by André Bellerive and Marc Bjerring, alumni from the Department of Mechanical Engineering, the Spivo Stick can be used with many devices, such as Go Pros, smartphones or traditional cameras, allowing users to capture their adventures from every angle.

The EngTech and MakerGirls Club members had the opportunity to work on their own individual video project, using Go Pros provided by the Richard L’Abbé Makerspace as well as seven Spivo Sticks, generously donated by Spivo Inc. From filming to editing, the kids learned the basics of videography while using an innovative device, which originated in the faculty.

The kids had a great time using the Spivo Sticks to capture footage across campus. 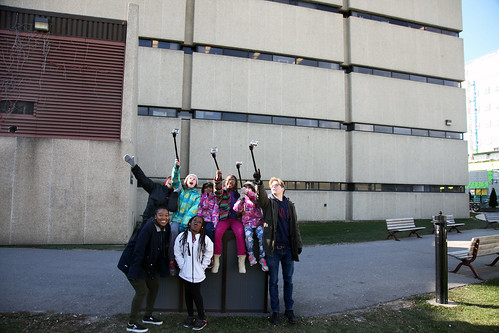 André Bellerive started working on his prototype during his last year at uOttawa, joined by now co-founder Marc Bjerring. Using 3D printers from Richard L'Abbé’s Makerspace, the duo refined their design, coming up with over 100 variations of their initial prototype. Today, Spivo Sticks are being sold in over 52 different countries, allowing users across the world to capture their adventures in an innovative way.

Spivo Stick has recently been featured on CBC’s Dragon Den, check out their pitch!